Engineers in the Center for Precision Engineering for Health (CPE4H) are focusing on innovations in diagnostics and delivery, cellular and tissue engineering, and the development of new devices that integrate novel materials with human tissues. Below is an excerpt from “Going Small to Win Big: Engineering Personalized Medicine,” featuring the research from the laboratory of Marc Miskin, Assistant Professor in Electrical and Systems Engineering. 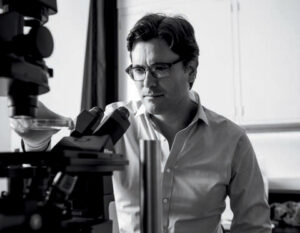 Since their creation, robots and robotic devices have been used to go places and complete tasks that humans have deemed too “dull, dirty or dangerous.” However, there is not a way for humans to observe, explore or interact with the world of cells and cell-sized matter at scale using robotic devices.

While for fifty years electronics have been getting smaller and smaller, smarts are only half the story; robots also need bodies and parts that move. Until recently, nobody knew exactly how to build the small actuators that are needed to construct a microscale robot.

Members of the research team led by Marc Miskin, Assistant Professor in Electrical and Systems Engineering, are harnessing new nanofabrication techniques to create robots that can operate on the same scale as cells and could therefore be used to interact with biology on a cellular level. Their robots can be mass-produced on a silicon wafer using the same techniques used to manufacture microchips, cost less than a cent each and are able to be injected through a syringe.

Measuring 70 microns across, about the width of a human hair or the size of a single-celled paramecium, the devices are too small to be seen with the naked eye, but can be made to move using onboard electronics.

In developing and deploying these robots, researchers could unlock a potential treasure trove of diagnostic and treatment capabilities. “We now finally have a match in size between cells and robots that you can communicate with and command,” says Miskin. “Biology is still leaps and bounds more complicated than electronics, but now that there is a foothold in this completely different dimension, what new medicine can you do that you couldn’t before?”